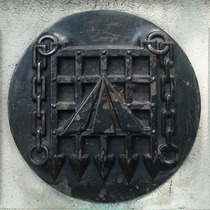 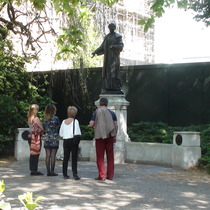 {Carved into the end wall on the left:}
Replica of badge, a broad arrow on the Westminster Arms, given by the Women's Social and Political Union to over 1000 women who suffered imprisonment for Women's Enfranchisement.

The sculpture shows a WSPU prisoners' badge. This was designed by Sylvia Pankhurst - see there for more information about it.

This section lists the subjects commemorated on the memorial on this page:
Women's Social and Political Union - prisoners' badge

This section lists the subjects who helped to create/erect the memorial on this page:
Women's Social and Political Union - prisoners' badge

This section lists the other memorials at the same location as the memorial on this page:
Women's Social and Political Union - prisoners' badge

The puzzle here is: what does this image depict? The Barbican? And what do ...

Phillip Ward-Jackson in his encyclopaedic "Public Sculpture in the City of Lo...