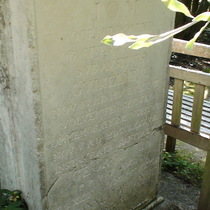 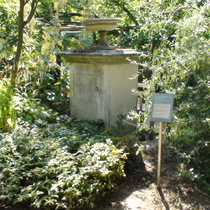 {Translates as:}
Erected to almighty Jupiter, Lord of the sea, on behalf of those citizens, subjects of William III, saved by his protection on 4th November 1688.

After the passing of a century this memorial was erected on 5th November 1788 to commemorate the restoration to health of George III.

His majesty did this with his own money.
29 February 1789
Britain, daughter of the sea.
He fulfilled his promise.

There are so many issues with this memorial, it's difficult to know where to begin.

We take the main part of the inscription to mean that a memorial was raised to mark the centenary of William III's arrival. Then it was noticed that the current king, George III, recovered his health at about the same date and so that event was added onto the inscription.

Note that the vase on the top of this plinth is wrong. Such a substantial plinth would have supported a large statue. For an example see the very similar and contemporaneous plinth for the statue of Queen Charlotte, George III's consort. Given the inscription, King William would be our best guess for the original occupant of this plinth but we can find no reference to a lost statue of that king, in London at least. So already we have a puzzle - what happened to the original statue, and who was it?

Inscriptions at this time were normally placed central in the space available. This inscription runs all the way down to the bottom so we think it very likely that the lower section (after "George III") was a later addition.

On a modern board nearby a partial translation of the Latin is provided. We asked David Hopkins, our Latin consultant, for advice. He confirmed that the translation is good and translated the rest (“P. P. P. F. AVG.” and “V. S. L. M.”) for us. V. S. L. M. stands for "votum solvit libens merito" and Wiktionary explains "This phrase is commonly found on votive offerings, signifying the offerer has given this previously promised offering out of his free will because the deity has granted his request." This is helpful - it confirms that George did something (not too clear what) as a thank you for the recovery of his health.

We also asked David about two textual puzzles with this memorial. Firstly: 1789, not being divisible by 4, did not have a leap day, so February 29 is an impossible date. The second puzzle may be related to the first. On the modern board with the translation, that date is given as: “(Possibly – “only temporary” was added on 29th February 1789)”.

Disappointingly, all David could do was agree that these are puzzles. He wrote “You’re quite right that Great Britain adopted the current (Gregorian) calendar system in 1752 and 29th Feb 1789 was a non-existent date. I can’t see how anything can be “temporary” on an engraving and the spacing doesn’t look as if anything has been amended. The only theory I have is that the date was a mistake." David ingeniously suggests that, with all those I's and X's, the engraver might have accidentally copied (part of) the wrong number. We'd expect the intended year to be after the previous year mentioned on the inscription (1788), and divisible by 4, i.e.: 1792, 1796, etc. but at 90 the format of Roman numerals changes significantly (XC, XCI, etc.) so we doubt the year was corrupted this way. If it was the day (XXIX) in February that was corrupted then the likely intended day might have been: XXI (21) or XIX (19). So if it was a engraver's error then it's most likely that the day is corrupt and the year is correct at 1789 - which is most helpful for us.

It would help if we knew what happened on that day in February? Four months after the memorial was erected, what was it the king did with his own money on that day? All we can think of is the inscription itself - which given the error, is nothing for the king to be boasting about!  And then we discovered this at History Home: "By mid February, the Regency Bill was ready to go to the Lords but never got there because by 1 March, George III had recovered."  Is there any significance in the identity of 1 March with 29 February?

Other comments which may be relevant:

The engraved inscription is in surprisingly good nick for c.300 years, especially if it’s been outside all this time.

Wikipedia puts November 1788 as a low point in George’s illness. But he had gone away to recuperate c. end July so perhaps in October/early November the story at the time was that he was getting better? Not sure we want to get into the ups and downs of his illness to this level of detail!

We have found no other memorial with a comparable inscription, nor one referring to the health of George III. But the Queen Charlotte statue, on the similar plinth, is in a square connected to his health.

If you’ve followed this so far, perhaps you can offer some solutions to some of our puzzles?

2022: Vic Keegan published "The century-long wait for William III’s statue in St James’s Square".  This refers to a statue of William, first funded in 1724 but not erected until 1794. We note that an unoccupied pedestal was installed in the Square in 1732 and we wonder whether that could be our pedestal? Could there have been a renewed attempt to erect the William statue in 1688, motivated by the centenary and the current king's restoration to health? However, our plinth is designed for a standing statue, whereas the statue in St James's is an equestrian one and, apparently, was always intended to be so.

This memorial was brought to our attention by a Londonist post about the various architectural cast-offs housed in Myddelton House Gardens: "How and when the monument got here, who commissioned or made it, why it was made, and why these events were commemorated together is a mystery — and will remain so forever laments Hewitt {senior gardener}, as anyone who may have been able to shed some light on it has long since passed."

This section lists the subjects commemorated on the memorial on this page:
William III's arrival and George III's health

{Around the base of the memorial:}Remember the men of Richmond who gave their...

George V should have been on duty to unveil this but he was seriously ill so ...