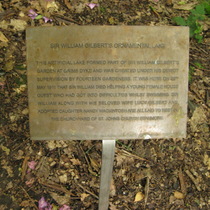 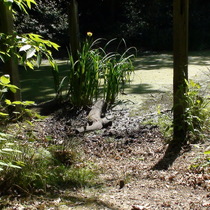 Sir William Gilbert's ornamental lake
This artificial lake formed part of Sir William Gilbert's garden at Grims Dyke and was created under his direct supervision by fourteen gardeners. It was here on 29th May 1911 that Sir William died helping a young female house guest who had got into difficulties whilst swimming. Sir William along with his beloved wife Lucy Gilbert and adopted daughter Nancy MacKintosh are all laid to rest in the churchyard of St. John's Church Stanmore.

We thank Matt Brown of Londonist for the photo of the plaque, taken in about 2007. Recently both we and Matt have, separately, failed to find it, so a status of 'lost' is a fair assumption. All we found was a stump in the ground beside the lake. The search is complicated by the fact that there are multiple ponds in the grounds. Wikipedia explains that following Gilbert's death his wife had the lake drained and since then plants have grown and various ponds formed so there is no way of knowing where the lake was in 1911.

A small island in the lake was, 1880 to 1938, home to the Soho Square Charles II statue. Seems it was removed for restoration but, from the state of it now, it's difficult to believe that ever happened. Wikipedia has a drawing of the statue on the island.

See the blue plaque at the building for more information about Grim's Dyke itself.

This section lists the subjects commemorated on the memorial on this page:
W. S. Gilbert's death

We understand that at least 13 of these names are also on the memorial cross ...

The UK's first roots reggae band The Cimarons was formed here in 1969.Federat...