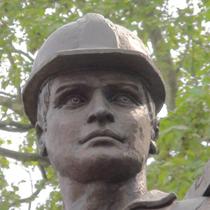 Wreaths are laid here each year on April 28, International Workers Memorial Day, and a two minute silence is observed at noon in memory of those who have suffered fatal injuries in accidents at work.

It seems no one is very happy with the location for this statue but it was the best that could be found.

But we've heard of a reason for this site being chosen.  Back in 1969 there was a nationwide May Day strike.  In London this included the Fleet Street newspaper workers and the dockers. These marched and converged here at Tower Hill.  It was an unofficial strike called in opposition to a white paper designed to curb unofficial strikes.  British Pathe news film.

This section lists the subjects commemorated on the memorial on this page:
Unknown building worker statue

This section lists the subjects who helped to create/erect the memorial on this page:
Unknown building worker statue