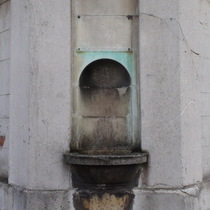 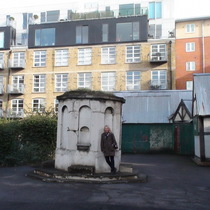 We do find ourselves taking photos of the most unlikely subjects. Our close-up photo would win a "dull picture" prize. It would have been more interesting had the plaque not been stolen - you can still see the screw holes.

Thanks to our friend Anne for providing scale in this picture. The building in the background is, presumably, upright so it's the turret which is on the lean.

This structure was originally the capping turret of the tower of St Olave Church, Tooley Street. Following removal of the tower in 1928 the capping turret was relocated here and converted to a drinking fountain. The sale of the church site financed the creation of this park, making it the appropriate site in which to place the turret.

The 1647 drawing by Wenceslaus Hollar shows the church with, on the top of the tower, a hut-like structure. The church was rebuilt in 1734 and images of it in the early 19th century (e.g. FamLoc) show no visible turret. If this is the turret kept from the first building then between 1734 and 1928 it must have been kept down at ground level, presumably in the church grounds.

The Hollar drawing shows the turret with a pointy, oniony, roof which makes it an attractive item and explains why people would want to keep it, so it's a pity that that feature been lost.

This section lists the subjects commemorated on the memorial on this page:
Turret from St Olave Church

Founded in the eleventh century in memory of St Olaf. The original building, ...