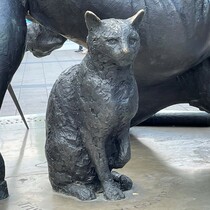 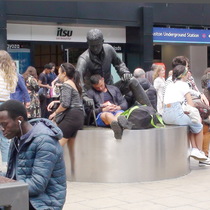 See the Flinders statue page for the inscription etc.

The statue shows Flinders plotting a course (despite the obstacles) on a stylised map of Australia, accompanied by his cat Trim (behind and not visible in our main photo).

We first photographed this statue in 2018 when it was in the main hall of the station, and the best photo we managed had 4 people sitting around the edge of the monument. We heard it had been moved outside so we revisited, expecting to find it less encumbered by rail customers. Huh. We'd wanted to try for a better photo of Flinders' face and to check the text on the inscriptions, but we decide not to disturb the travelling public.

2022: Another visit gave us some close-up photos but still most of the inscription is under the travelling public's bum.

This section lists the subjects commemorated on the memorial on this page:
Trim statue

This section lists the other memorials at the same location as the memorial on this page:
Trim statue