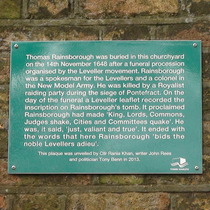 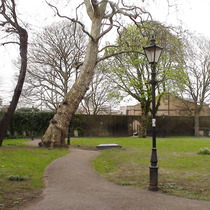 Thomas Rainsborough was buried in this churchyard on the 14th November 1648 after a funeral procession organised by the Leveller movement. Rainsborough was a spokesman for the Levellers and a colonel in the New Model Army. He was killed by a Royalist raiding party during the siege of Pontefract. On the day of the funeral a Leveller leaflet recorded the inscription on Rainsborough's tomb. It proclaimed Rainsborough had made 'King, Lords, Commons, Judges shake, Cities and Committees quake'. He was, it said, 'just, valiant and true'. It ended with the words that here Rainsborough 'bids the noble Levellers adieu'.

This plaque was unveiled by Cllr Rania Khan, writer John Rees and politician Tony Benn in 2013.

At the unveiling musketeers from the Rainsborough Regiment of the Sealed Knot fired a volley to mark the occasion.

This section lists the subjects commemorated on the memorial on this page:
Thomas Rainsborough

A group of political radicals during the Civil War and the interregnum.  Its ...

Created by the Parliamentarians to oppose the King's forces.  It was a profes...

This section lists the subjects who helped to create/erect the memorial on this page:
Thomas Rainsborough

Political activist and writer.  2012 co-authored 'A People's History of London'.

Returned from his first trip to America Dickens spent some time here in 1842-...