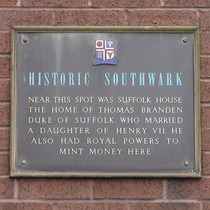 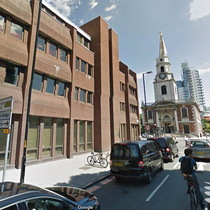 Near this spot was Suffolk House, the home of Thomas Branden, Duke of Suffolk, who married a daughter of Henry VII. He also had royal powers to mint money here.
Historic Southwark

The plaque refers to "Thomas Branden, Duke of Suffolk". We have two problems with this: firstly "Branden" is elsewhere consistently spelt "Brandon" and, secondly, it was Thomas's nephew, Charles Brandon, who was created the first Duke of Suffolk by Henry VIII and married into the royal family. Also, it was only after the King had taken possession of the building that it was used for minting coins. We respectfully suggest that if a plaque is re-erected on the site then it should be re-researched first.

We photographed the plaque back in 2013 but forgot to take our "site" photo. When we revisited in 2016 the site was totally wrapped so we resorted to Google Maps History from July 2014. An extremely dull office block from c.1980s currently being replaced with a block of flats that "harmonises various facets for a vibrant, connected way of life".  Wonder if they will find somewhere for a plaque?

This section lists the subjects commemorated on the memorial on this page:
Suffolk House

From British History On-line 1: The Brandon family had a residence on this si...

Not to be confused with Queen Mary Tudor, who was named after her. This lady ...

Brought up at the court of Henry VII. A favourite of King Henry VIII. Took po...

This section lists the subjects who helped to create/erect the memorial on this page:
Suffolk House

In our 2003 photo you can see two plaques: the one sticking out of the wall i...