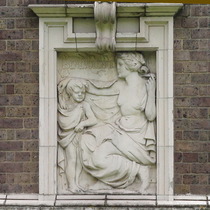 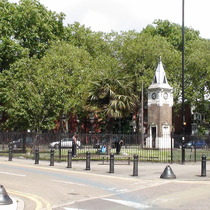 {Plaque on the south-east face:}
In memory of Stanley B. Atkinson, JP, MA, LLM, MB, BSc, MRCS, LRCP, Barrister-at-law, Stepney Borough Councillor, guardian of the poor, member of Metropolitan Asylums Board. Born 1873. Died 1910.
This tower was erected in 1913 in recognition of his unselfish devotion to the public good.
Greater love hath no man than this, that a man lay down his life for his friends. John 15:13.

The tower was moved in 1934 so we imagine that's what the damaged plaque was about.

The text suggests that he "laid down his life for his friends". This is supported by the BMJ obituary which claims his early death was probably due to overwork during a Mile End election campaign.

From PMSA we learn: This tower was erected in 1913 in Burdett Road. That's now the main road running down the east side of Mile End Park.  It's quite a long road and we don't where exactly the tower was, but in 1934 it was moved to its present location for reasons of road safety (for which read "widening").  The entire job was achieved in a single night, 28 January 1934. The tower was restored in 1994.

This section lists the subjects commemorated on the memorial on this page:
Stepney Green tower

A campaign by Florence Nightingale and Edwin Chadwick led to the establishmen...

This section lists the other memorials at the same location as the memorial on this page:
Stepney Green tower

To the glory of God. St Philip, Stepney. This stone was laid as a foundation ...