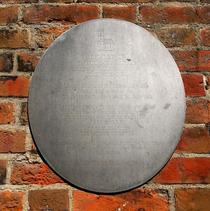 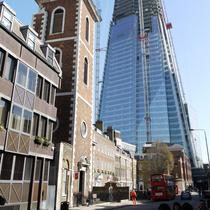 Church of St Thomas Apostle, (formerly St Thomas Martyr) Southwark, S.E.1. Parish church of St Thomas 1136-1862, which also served as the chapel of St Thomas's hospital 1215- 1862, rebuilt in 1703 by Thomas Cartwright & Son (sometime master masons to Christopher Wren).The roof space was used as the hospital's herb garret and from 1822 as its operating theatre. Rediscovered by Raymond Russell in 1956, the herb garret and operating theatre is now a museum supported by the Lord Brock Memorial Trust.

The first church on the site was part of St Thomas's Hospital in 1212. it was named after St Thomas a Becket, because pilgrimages to his tomb at Canterbury began nearby. It was renamed St Thomas Apostle, after the cult of Becket was abolished in the reformation. The present building was erected in 1703, but became redundant as a church in 1899. Its foundations were damaged during the extension of the Jubilee underground line.

This section lists the subjects commemorated on the memorial on this page:
St Thomas Apostle

Area in the roof of St Thomas Apostle Church where the apothecaries of St Tho...

Arthur Deakin HouseThis block was built in 1956 by Stepney Borough Council an...

Queen Mary died in 1953 at her home, Marlborough House, which is the building...

{Regimental badge:} London Scottish, strike sure. {Beneath the badge:} On th...