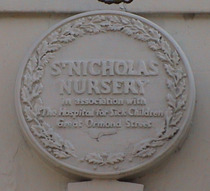 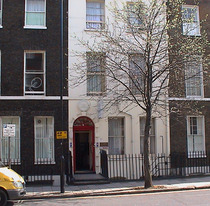 Credit for this entry to:
Nicholas Baldwin

This nursery was set up and funded by the Friends of the Children of Great Ormond Street Hospital in 1955 for the use of nursing mothers and children with feeding difficulties. It was staffed by the hospital and this seems to have caused problems so by 1964 it had closed. We are grateful to Nicholas Baldwin, the hospital's archivist for providing this information. We were prompted to discover this history because this plaque looks so much like a memorial. But it seems it was erected more as a sign for the nursery rather than as a memorial of anything.

The white plaque is immediately above the door. The building (2017) is a hotel and Christian Luloian tells us it was already one in 2014.

This section lists the subjects commemorated on the memorial on this page:
St Nicholas Nursery