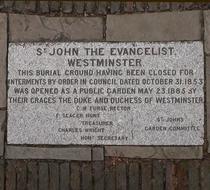 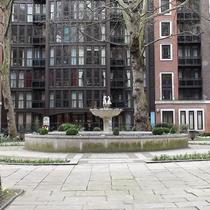 St John the Evangelist Westminster
This burial ground, having been closed for interments by order in council dated October 31 1853, was opened as a public garden May 23 1885 by their graces the Duke and Duchess of Westminster.
C. W. Furse, Rector
F Seager Hunt - Treasurer
Charles Wright - Hony.Secretary
- St John's Garden Committee

This section lists the subjects commemorated on the memorial on this page:
St John the Evangelist garden

This section lists the subjects who helped to create/erect the memorial on this page:
St John the Evangelist garden

1882 Rector of St John the Evangelist and went on to become Archdeacon of Wes...

As Katherine Caroline Cavendish she married the soon to be Duke of Westminste...

Son of the 2nd Marquess. Created Duke in 1874, mainly it seems for owning lar...

This section lists the other memorials at the same location as the memorial on this page:
St John the Evangelist garden

{Running around the urn near the top:} Sweet Thames run softly till I end my ...

We feel the date probably gives a clue to what this substantial fountain was ...