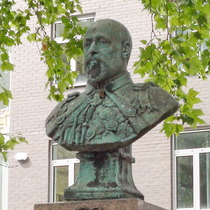 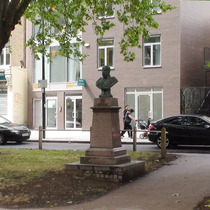 {Immediately below the bust there is a curvaceous mongram:}
ER VII

{On the front of the pink granite plinth:}
Edward VII
"Peace hath her victories no less renowned than war."
Erected by a few freemasons of the Eastern District of London, 1911.

While Prince of Wales Edward was Grand Master of the English Freemasons. The quote is from Milton's "To the Lord General Cromwell, on the Proposals of Certain Ministers" of 1652 and refers to Edward's role in building good relations with Europe, especially France (the Entente Cordiale was signed during his reign) but he fared less well with Germany.

The PMSA page gives "The bust was unveiled ... by Mr Edward White JP, Chairman of the London County Council, who presented it to the Stepney Borough Council. The sculptor is unknown, but the casting was carried out by a local firm, Harris and Son of Mile End Road. At the unveiling ceremony there was much praise for the 'excellent likeness' the bust represented."

This section lists the subjects commemorated on the memorial on this page:
Edward VII bust

This section lists the subjects who helped to create/erect the memorial on this page:
Edward VII bust

Octavia Hill, born 1838.The founder of modern social work through her tireles...