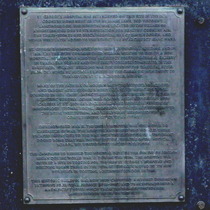 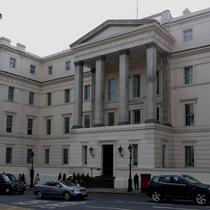 St George’s Hospital was established on this site in 1733 in a country home built in 1719 by James Lane, 2nd Viscount Lanesborough. The hospital was located in the village of Knightsbridge due to the reputation for healthy country air. The three-storey red brick hospital was of simple design and wings were later added to the structure by architect Isaac Ware.

St George’s Hospital quickly outgrew its original building and in 1826, the trustees commissioned William Wilkins to design a new hospital. Wilkins was also the architect for the National Gallery in Trafalgar Square and University College. Completed in the early 1830s, Wilkins' building was designed In the classical style from drawings by Nicholas Revett of the choragic monument to Thrassylus at the Acropolis, Athens.

Many of the fathers of modern medicine studied, practiced and taught at St George’s Hospital and its medical school founded in 1831. Chief among these was John Hunter, the father of scientific surgery. Other well-known medical pioneers with careers at St George’s include Edward Jenner, a pioneer of immunology, Thomas Young, professor of natural philosophy to the Royal Institution and Henry Gray renowned for his comprehensive study of anatomy.

During World War II, the entire hospital was given over to casualties of war. The hospital and those who worked there escaped injury due to the war with the exception of a thousand pound bomb that fell on the lecture theatre of the medical school, but fortunately failed to explode.

The campaign to rebuild the hospital outside the centre of London began during World War II. During the 1950s, the hospital was offered a site in Tooting for the new St George’s Hospital and building began there in the 1970s. St George’s moved to its new buildings in Tooting South West London in 1980.

This historic building has now been carefully restored during an extensive four-year project (1988-1991) and transformed into a magnificent hotel which takes the name of the former Lanesborough House on this site.

Both plaques can be seen in our photo: one behind the lamppost on the left; the other attached to the bar in front of the door below the colonnade.

This section lists the subjects commemorated on the memorial on this page:
St George's Hospital - 2

A 5 star hotel, reputedly the most expensive in London. In 2011 the highest r...

Set up when the entire medical staff of the Westminster Hospital resigned in ...

Anatomist and surgeon. Born in Pimlico. In 1845 he became a student at St Geo...

This section lists the other memorials at the same location as the memorial on this page:
St George's Hospital - 2

There is no indication as to who erected the plaque, but the fulsome descript...

{Above a stylized picture of two performers:}Lyric TheatreBuilt by C.J. Phipp...