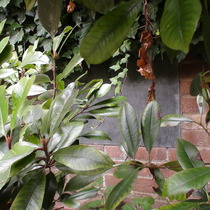 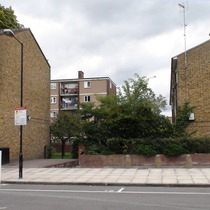 St Annes Neighbourhood Stepney
To commemorate the redevelopment by the London County Council of this extensively war damaged area this stone was unveiled by Councillor J. Sambrook, JP, Mayor of Stepney on 28th February 1956.

We thank Jamie Davis for finding this British Pathe news film of the unveiling. City of London have a drawing showing this corner as it was originally envisaged, with someone showing interest in the plaque. The decorative open brickwork shown in both the film and the drawing has been lost here, but, 2015, could still be seen further west in Dora Street.

Sorry for such a dull picture. We normally hope to include a person to animate street scenes but the only life on the street this day was an approaching bin lorry, until we saw the cat slink out from the plants. The plaque is behind the foliage just to the right of the moggy.

This section lists the subjects commemorated on the memorial on this page:
St Annes Neighbourhood - post-war redevelopment

This section lists the subjects who helped to create/erect the memorial on this page:
St Annes Neighbourhood - post-war redevelopment