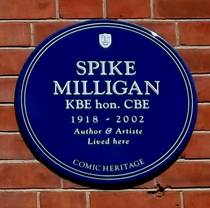 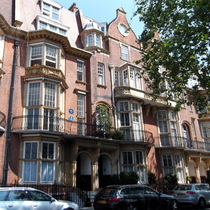 The plaque was unveiled by Eric Sykes.

The two men shared an office at this address for more than 50 years. They were members of Associated London Scripts, a comedy writers’ co-operative. Other members were Frankie Howerd and Ray Galton and Alan Simpson. We note that Milligan's plaque says he 'lived' here, whereas Sykes' says 'worked'.

2022: This building was for sale and London Post provided some excellent research on its showbiz history which we copy here extensively (hoping that London Post don't mind): "...known as the “home of British comedy”, where Eric Sykes, Spike Milligan (who also lived there), Peter Sellers, Terry Nation and others worked on famous TV, radio and theatre scripts ..." "The place where The Goon Show, Hancock’s Half Hour, Dr Who and the Daleks, Genesis of the Daleks and Steptoe and Son were created was originally built by the Orme family in the 1890s as part of a terrace of grand London townhouses. ...

"9 Orme Court’s role as the home of British comedy and drama can be traced back to 1953 when comedians Eric Sykes and Spike Milligan set up creative offices at 130 Uxbridge Road in Shepherd’s Bush Green and launched, along with Ray Galton and Alan Simpson, Associated London Scripts (ALS), the UK’s first co-operative for comedy writers. They were joined by other creative writers including Terry Nation, Johnny Speight, Tony Hancock, Denis Norden, John Antrobus, Dennis Spooner and Barry Took and frequent visitors such as Harry Secombe and Peter Sellers would wander into ALS to read and rehearse scripts.

"Providing radio, TV and theatre scripts to the BBC, ITV and leading theatres ALS was highly successful, with up to 30 writers using the co-operative, and so in 1962 it relocated to the grander surroundings of 9 Orme Court in Bayswater, just 100 yards away from Kensington Gardens, with Eric and Spike initially renting the former townhouse and ALS letting rooms to the various writers for a peppercorn rent.

"For his office Eric took the first floor reception room to the front of the property, with Spike taking the first floor living room to the rear. In Spike’s office there was a pull-out bed and he also had a bedroom on one of the upper floors, for many years Spike used 9 Orme Court as his office and London pied-a-terre.

"Norma Farnes, Eric and Spike’s manager/agent, took the dining room on the ground floor as her office, with other writers taking rooms on the various floors.

"It was from 9 Orme Court that the scripts for The Goon Show (by Spike, Eric and John Antrobus), Educating Archie (by Eric and Sid Colin), Hancock’s Half Hour and Steptoe and son (both by Ray Galton and Alan Simpson), Till Death Do Us Part (by Johnny Speight) and The Howerd Crowd and The Frankie Howerd Show (both by Eric) were written. Between 1961 and 1979 it was also where Eric wrote the scripts for his long running sitcom ‘Sykes’ for BBCTV.

"9 Orme Court is also the birthplace of Dr Who’s famous daleks and Davros. From his second floor office Terry Nation wrote the 1963 BBC script for Dr Who and The Daleks and in 1975 the recurring character of Davros in Genesis of the Daleks. From his office Dennis Spooner wrote scripts for Thunderbirds and Stingray for Gerry Anderson.

"In 1967 Robert Stigwood bought a controlling interest in ALS; Ray Galton and Alan Simpson favoured the deal and left to join Stigwood whilst Eric and Spike did not so sold their shares in ALS and remained at 9 Orme Court. Eric and Spike jointly purchasing the freehold and continued to maintain the property as a creative writers co-operative.

"During the early 1970s Spike sold his interest in 9 Orme Court to Eric and by the late 1970s most of the original writers had left (for example Terry Nation relocated to Los Angeles) and so the offices ceased being a writers co-operative were leased to other professionals.

"Eric continued to work in his first floor office up until 2011 before his death in 2012. It was from here he worked on his voiceovers for the BBCTV Teletubbies series (1997-2001) and rehearsing his parts in the Hollywood movies The Others (2001) with Nicole Kidman and as Frank Bryce in Harry Potter and The Goblet of Fire (2005).

"...Eric was ... promoted to CBE in 2004 for services to drama, with a small party held in 2004 at 9 Orme Court to celebrate the CBE, attended by family and friends including Denis Norden, Richard Briers and Sean Connery. .... Now the family of Eric Sykes have decided to sell 9 Orme Court."

This section lists the subjects commemorated on the memorial on this page:
Spike Milligan - W2

This section lists the subjects who helped to create/erect the memorial on this page:
Spike Milligan - W2

This section lists the other memorials at the same location as the memorial on this page:
Spike Milligan - W2

Queen's College, founded 1848. This college is an Independent Day School for...

You have to admire the 1800 skill at sentence construction, and the confidenc...