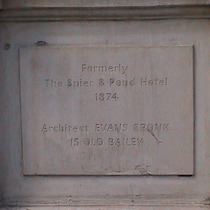 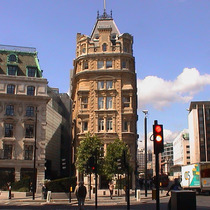 {On a plaque to the left of the door:}
Formerly The Spier & Pond Hotel, 1874.
Architect: Evans Cronk
15 Old Bailey

The plaque has the name as "Spier and Pond" but this should read "Spiers and Pond".

Built in 1874 by Evans Cronk as a hotel, it closed in 1900 and became offices. A plaque to the right of the door informs: "Reconstructed as Offices, 1985, for Friends Provident Life Office."

The managing agents for this property say: "A handsome late-19th-century property, this was originally the first ever hotel with electric lighting. And while this original feature has been replaced to meet today‘s standards, much of the serviced office building‘s elegant Victorian detail still remains, following a sympathetic restoration", while Ornamental Passions are critical of the original sculptural decorations, pointing out a modern carving of higher quality than an original.

This section lists the subjects commemorated on the memorial on this page:
Spiers & Pond Hotel

This Ruislip website refers to a lost S&amp;P war memorial and gives some his...

The plaque seems to have been erected to celebrate 34 years which seems odd.

The style of the plaque, its typeface in particular, made us question the LCC...