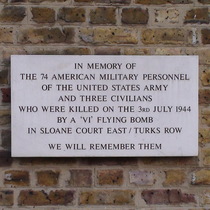 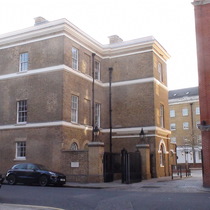 In memory of the 74 American military personnel of the United States Army and three civilians who were killed on the 3rd July 1944 by a 'V1' flying bomb in Sloane Court East / Turks Row.
We will remember them.

We are extremely grateful to London Memorial who have done the research on this event, all recorded in their excellent website, from which all our information comes.

Refer to Sloane Court East V1 bomb for info about the event. The number of dead is not accurate on either plaque. At the time the death toll was kept as quiet as possible for reasons of morale, so the facts were not readily to hand. We have accepted, gratefully, the results of London Memorial's researches. For summary info about the military dead refer to American servicemen killed at Sloane Court East. For the names of the 65 American servicemen we refer you to London Memorial.

But we have created our own page for each of the 9 lost civilian local residents, linked into this wall plaque, and only this wall plaque because the other only commemorates the military. Of the 9 civilians all but 1 were female, 3 were serving on the home front, and most were middle-aged or elderly.

From London Memorial: This plaque was funded and installed by "Bill Figg of Chelsea, who had witnessed the aftermath of the 1944 bombing".

This event is memorialised by two plaques, just far enough apart for us to have them on separate pages: this wall plaque and this pavement plaque. Oddly both are in Turk's Row, though all the damaged/destroyed buildings were in Sloane Court East.

Mainly due to the location of this plaque we thought that this building had been involved with the bomb in some way but we now think that this is not correct. Cavalry House, now occupied by Garden House School, was originally barracks, part of the early-mid C19th Duke of York's Headquarters. We cannot discover how it was used during WW2 but it appears to have had no connection with those who were billeted, and killed, in Sloane Court East. This is confirmed by the fact that many were killed while boarding a truck to get to their usual workplace.

Just 4 years before the plaque was unveiled, Cavalry House was converted, c.1994, into residential accommodation and we think that explains the presence of this plaque. Developers are often keen, in return for the development permission, to fund projects seen as beneficial for the local community. In this case, having a historic plaque on their own wall was probably seen as beneficial to their sales as well!

This section lists the subjects commemorated on the memorial on this page:
Sloane Court East bomb - wall plaque