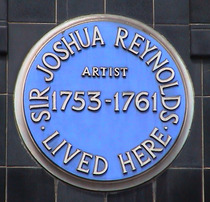 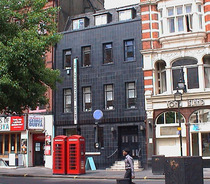 April 2016:  Our colleague Alan Patient reports that this plaque is now lost, or, at the very least hidden, behind the large "White Space" sign which now covers the space between the bottom of the first windows and the top of the ground floor windows, across the whole width of the building.

This section lists the subjects commemorated on the memorial on this page:
Sir Joshua Reynolds - Great Newport Street - lost

This section lists the other memorials at the same location as the memorial on this page:
Sir Joshua Reynolds - Great Newport Street - lost