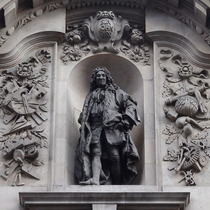 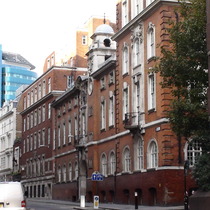 {In the cartouche above:}
Sir John Cass

A statue was commissioned by the Sir John Cass Foundation in 1751. It was first erected on the original school building in a first floor niche overlooking Aldgate High Street with a niche either side holding the traditional statues of charity children. In 1869 the Cass statue was moved to the new school building in Jewry into the purpose-made niche but by 1919 (possibly to protect it from bomb damage) it had moved inside to the entrance lobby. In 1980 it was removed and after conservation was installed at the Guildhall Old Library Lobby. The statue which now stands in the niche in Jewry Street is one of the replicas create in 1998 in celebration of the 250th anniversary of the Foundation.

Cass is depicted striding forwards causing his Alderman robes to flap outwards revealing his, then, modern day attire below.

August 2017: We came across a copy of this statue in the entrance lobby of the London Metropolitan University Archive (Goulston Street, but Old Castle Street side).

January 2018: We found the statue at the Guildhall. So now we've seen the original and two copies. Is that the full set? Any others?

2020: Following the Black Lives Matter protests we read that this statue in Jewry Street is gong to be removed, and, July 19 we read that it has gone. We are keeping it here for the record, but flagged as 'lost'.

2021: Artnews reported that the statue at the Guildhall "will be returned to the Sir John Cass Foundation" and presumably hidden away in the basement or attic.

Building by A. W. Cooksey, 1900. The small busts of the charity children recall the statues which flanked the original Cass statue in its original site. Ornamental Passions like the ornamental sculpture on this building very much.

From Our History "The first school building stood in the corner of the Churchyard of St Botolph’s and consisted of two storeys. The school was housed on the upper floor, and the rents from the shops on the ground floor, and the fees for the burials in the vaults below, were applied to the upkeep of the school. The pupils (there were 50 boys and 40 girls) wore a blue-coat uniform, and took their meals in Aldgate, which stood across the road, and was where the Master and Mistress lived."

This section lists the subjects commemorated on the memorial on this page:
Sir John Cass statue - Jewry Street

This section lists the subjects who helped to create/erect the memorial on this page:
Sir John Cass statue - Jewry Street

This section lists the other memorials at the same location as the memorial on this page:
Sir John Cass statue - Jewry Street

This is a rather grand memorial: the statue with Campbell resting his telesco...

{Cut into the red marble immediately below the statue:}Beaconsfield {On the ...