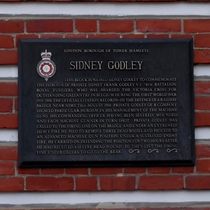 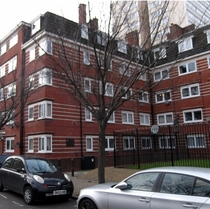 {Next to the badge of the Royal Fusiliers:}
Sidney Godley
This block is named Sidney Godley to commemorate the heroism of private Sidney Godley V.C. (4th. Battalion Royal Fusiliers) who was awarded the Victoria Cross for outstanding gallantry in Belgium during the first World War 1914 - 1918. The official citation records - In the defence of a railway bridge near Nimy 23rd. August 1914. Private Godley of B Company showed particular heroism in his management of the machine guns, his commanding officer having been severely wounded and each machine gunner in turn shot. Private Godley was called to the firing line on the bridge and under an extremely heavy fire he had to remove three dead bodies and proceed to an advanced machine gun position under a sustained enemy fire. He carried on defending the position for two hours after he had received a severe head wound. He then left the firing line under orders to go to the rear.

In later life he became a school caretaker in Tower Hamlets, which is the only connection we can find between him and the area.

This section lists the subjects commemorated on the memorial on this page:
Sidney Godley - E2

This section lists the subjects who helped to create/erect the memorial on this page:
Sidney Godley - E2