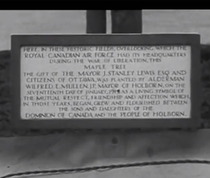 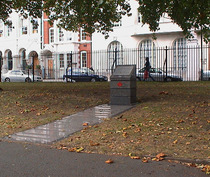 Here, in these historic fields, overlooking which the Royal Canadian Air Force had its headquarters during the war of liberation, this Maple Tree, the gift of the Mayor J. Stanley Lewis Esq. and citizens of Ottawa, was planted by Alderman Wilfred E. Mullen JP, Mayor of Holborn, on the seventeenth day of January 1946 as a living symbol of the mutual respect, friendship and affection which in those years, began, grew and flourished between the sons and daughters of the Dominion of Canada and the people of Holborn.

This section lists the subjects commemorated on the memorial on this page:
Royal Canadian Air Force - WW2 HQ, Tree, 1946

The plaque actually commemorated just the friendship between the people of Ot...

This section lists the subjects who helped to create/erect the memorial on this page:
Royal Canadian Air Force - WW2 HQ, Tree, 1946

This section lists the other memorials at the same location as the memorial on this page:
Royal Canadian Air Force - WW2 HQ, Tree, 1946

Planted on 25th June 1995 to celebrate the spirit and vitality of the childre...

Tilla platyphyllos (broad leaved lime) planted by The Right Hon. The Lord May...

To commemorate International Year of Peace, 1986, this field maple tree was p...

We decided against transcribing the apostrophe in "tree's" and using the Lati...

The quotations are from Gibran's The Prophet. It seems possible that Stepha...