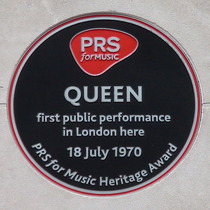 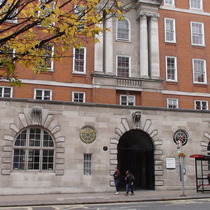 Brian May who was a student at Imperial said before the unveiling: "The first proper gig we did was at Imperial College in the Union Hall."

The plaque was first erected in the Hall on the ground floor on the left but on 17 April 2013 it was not there and we were told that "next week" it was to be re-installed on the street facade of the building, presumably to make it more public. We returned some months later and photographed it there.

This section lists the subjects commemorated on the memorial on this page:
Queen's first gig

Rock group.  Lead singer was Freddie Mercury. The band, including Freddie and...

This section lists the subjects who helped to create/erect the memorial on this page:
Queen's first gig

The stone gateway is all that remains of the early 17th century Westminster H...