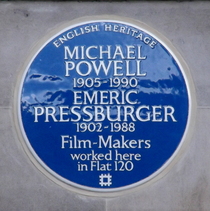 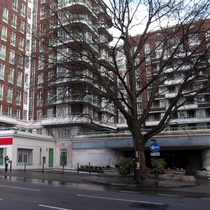 From the EH page: "Powell and Pressburger and their production company - The Archers - operated out of the Dorset House flat from 1942 to 1947. The décor of the office was in keeping with the war and post-war years of austerity - there were camp beds in case of air-raid warnings and Powell remembered that they never bothered to furnish the flat properly or to hang pictures and posters."

English Buildings appreciates this 1930s building, as do we.

This section lists the subjects commemorated on the memorial on this page:
Powell and Pressburger

This section lists the subjects who helped to create/erect the memorial on this page:
Powell and Pressburger

Site of the Bull and Mouth Inn, demolished 1888.The Corporation of the City o...