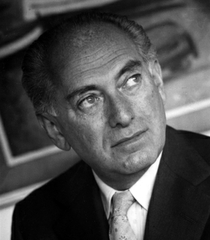 Author and screenwriter. Born Imre Josef Pressburger at 3 St Peter's Street, Miskolc, Hungary. He moved to Berlin in 1926 to work as a journalist and scriptwriter. In 1935 he came to Britain and initially worked for fellow Hungarian Alexander Korda. He was introduced to director Michael Powell in 1939 and together they produced some of the classic films of the time, including '49th Parallel', 'The Life and Death of Colonel Blimp', 'Black Narcissus' and 'A Matter of Life and Death'. Died at the Foxearth Lodge Nursing Home, Woodbridge, Suffolk.

This section lists the memorials where the subject on this page is commemorated:
Emeric Pressburger

A subdivision of the former General Post Office, (The equivalent of the moder...