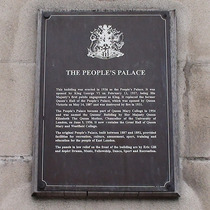 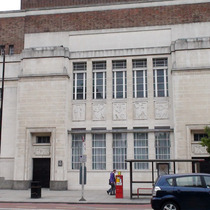 The People's Palace became part of Queen Mary College in 1954 and was named the Queens' Building by Her Majesty Queen Elizabeth The Queen Mother, Chancellor of the University of London, on June 5, 1956. It now contains the Great Hall of Queen Mary and Westfield College.

The original People's Palace, built between 1887 and 1892, provided facilities for recreation, culture, amusement, sport, training and education for the people of East London.

The panels in low relief on the front of the building are by Eric Gill and depict Drama, Music, Fellowship, Dance, Sport and Recreation.

The plaque names only 6 relief panels but there are 7, music being represented twice.

Within a few months of us first spotting this plaque our colleague, Alan Patient, tells us it has gone missing, September 2010.

Good photographs of the relief panels, by Eric Gill, are available at the splendid Ornamental Passions.

This section lists the subjects commemorated on the memorial on this page:
People's Palace

This section lists the subjects who helped to create/erect the memorial on this page:
People's Palace

The Corporation of the City of London Site of Grey Friars Monastery, 1225 - 1538