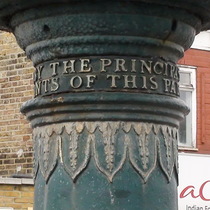 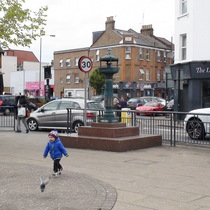 {On a modern brass plaque attached to the monument:}
This monument, erected by the principal inhabitants of Tooting in 1823, denotes the site of an artesian well sunk by the parish at their own expense. From the near-by pump the villagers received a supply of water at the rate of 130 gallons per minute. Known as "The Parish Pump" it was in use up to the end of the 19th century. Other pumps at Tooting Broadway (then known as Tooting Corner) and in Totterdown Street were in private ownership.

{Around the monument, cast in the metal:}
Erected by the principle inhabitants of the parish, 1823.

The quirky and much-missed Faded London Blog had a post on this item. Borough photos has a 1906 photo showing this structure in front of the Mitre Hotel, albeit the previous building of the pub. But the pump, surrounded by railings, looks closer to the pub than it is now, and we doubt that it was the pub that got moved.

We find this structure puzzling - it doesn't seems to have the necessary attributes of a pump. Where's the handle, where's the spout? (If you are now quietly singing to yourself "I'm a little teapot" - sorry.) The plaque talks about a "nearby pump" but that might just be referring to this pump having been moved from its original, nearby location, closer to the pub.

This section lists the subjects commemorated on the memorial on this page:
Parish pump Tooting

Artesian well sunk by the parish at their own expense. From the near-by pump ...

This section lists the subjects who helped to create/erect the memorial on this page:
Parish pump Tooting

the principal inhabitants of Tooting in 1823

Wish we knew who those generous and rather self-important people were.