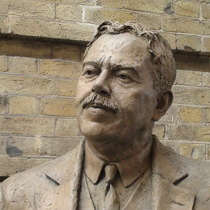 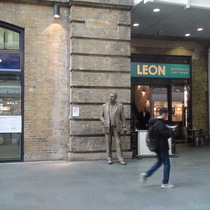 {On a plaque attached to the wall behind:}
Sir Nigel Gresley, 1876 – 1941
Chief Mechanical Engineer
1911 – 1923 Great Northern Railway,
1923 – 1941 London & North Eastern Railway.
Based in an office at this station, he designed powerful, elegant and fast locomotives including the world famous “Flying Scotsman” and “Mallard”, the fastest steam locomotive in the world. His streamlined trains departed from this station. They set new standards of comfort, speed and safety and were the first truly high speed trains.
Sculptor: Hazel Reeves FRSA
Placed by the Gresley Society Trust on 15th April 2016, the 75th anniversary of his death.
www.gresley.org

Our photo shows the statue shortly after unveiling, with only a temporary notice. By February 2017 this had been replaced with a plaque. Unveiled on the 75th anniversary of Sir Nigel’s death.

As widely reported this statue was originally designed with a duck companion, at Sir Nigel's feet: "According to a planning application, artist Hazel Reeves included the duck not only in a nod to the Mallard, but because Sir Nigel was famous for feeding ducks at his Hertfordshire home." But then came the great duck debate - the family and others did not want the duck. As you see in our photo the "no bird" lobby won the day but it it was a close-fought battle, even drawing the Guardian into the fray. This controversy kept the statue world enthralled for almost two years. We were pro-duckers; which side were you on?

The Guardian's report on the controversy has a photo of the statue - with duck.

This section lists the subjects commemorated on the memorial on this page:
Nigel Gresley statue

This section lists the subjects who helped to create/erect the memorial on this page:
Nigel Gresley statue

Our picture comes from the video of the unveiling of the Gresley statue, on R...