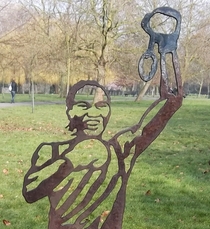 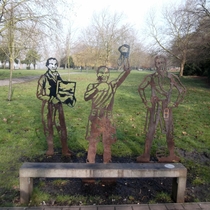 {On the bench in front of the statues:}

Plaque 2:
Walter Tull 1888 - 1918 played for Tottenham Hotspur; amongst the first Afro-Caribbean players in the football league and the first black British army officer.

Luke Howard 1772 - 1864 chemist and meteorologist who created a naming system for cloud formations and recorded them in paintings.

This section lists the subjects commemorated on the memorial on this page:
Nicola Adams - steel statue

Boxer. Born in Leeds. She fought (and won) her first bout at the age of thirt...

This section lists the subjects who helped to create/erect the memorial on this page:
Nicola Adams - steel statue

This section lists the other memorials at the same location as the memorial on this page:
Nicola Adams - steel statue

{On the granite 'floor' on which she stands:}Unveiled by Her Majesty The Quee...