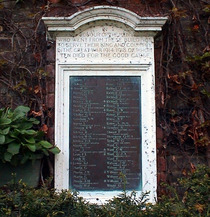 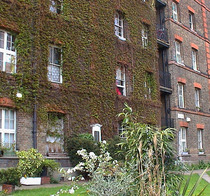 In honour of the men who went from these buildings to serve their king and country in the Great War 1914 - 1918 of whom ten died for the good cause.

Unusually this memorial lists all the men who went to war, not just those who died. The names of the ten who did die are marked with a little "+", which to us seems insufficient recognition for their sacrifice.

The two blocks that make up New Court are now listed. Built in the 1850s to house the servants of the residents of the elegant houses in Flask Walk. In 1975 number 39 New Court was squalid enough for Sid Vicious and Johnny Rotten to call it home. Sid apparently etched his initials into one of the bricks on the corner of a communal entrance and they can still be seen. Other infamous occupants: Boy George, Steve Took from T-Rex.
News Item from 2004: Tenants of what is believed to be the earliest example of purpose-built social housing in London are to be consulted on transferring to Paddington Churches Housing Association to fund their refurbishment. Camden Council has given the go-ahead to plans to transfer the two Grade 2 listed blocks at New Court, Hampstead, which were originally built in 1854, to PCHA at nil value.

By December 2006 the works were so well progressed that the memorial was hidden behind protective boards and we could not review our transcription, so there are a few queries remaining.

Whilst researching some of the names our colleague Andrew Behan points out that, at least between WW1 and the 1950s, the block was called New Buildings, not New Court.

We've read that Sid Vicious etched his initials into bricks on the corner of a communal entrance. A photo would be good, though if it's only initials ...

This section lists the subjects commemorated on the memorial on this page:
New Court WW1 memorial

Q.W.R. Fought but did not die in WW1. Our colleague Andrew Behan has researc...

Andrew Behan has kindly provided this research: Private William Arscott was b...

R.A.S.C.. Fought but did not die in WW1. Andrew Behan has kindly provided th...

Opposite this site stood St Margaret, Fish Street Hill, destroyed in the Grea...