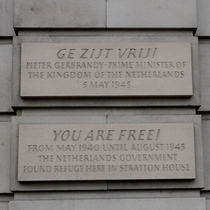 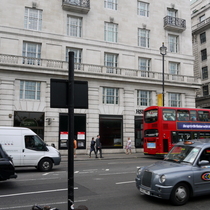 {Top plaque:}
Ge zijt vrij!
Pieter Gerbrandy. Prime Minister of the Kingdom of the Netherlands
5 May 1945.

{Lower plaque:}
You are free!
From May 1940 until August 1945 the Netherlands Government found refuge here in Stratton House.

We are grateful to Christina Ilonka Jansen for writing to us about these plaques.  She was working as Cultural Counsellor at the Dutch Embassy from 2002 to 2006 and was responsible for the idea, creation and instalment of the plaques on Stratton House in 2005. They decided on two plaques as they wanted to quote Gerbrandy's famous words spoken in a radio broadcast, in Dutch and also make it understandable for English speakers. The plaques were unveiled by the Dutch Prime Minister, Jan Peter Balkenende, in the presence of grandsons of Gerbrandy and Churchill.

A Dutch colleague confirms that 'Ge zijt vrij' translates as 'You are free', but he points out that it is rather archaic; almost the equivalent of saying 'Thou art free' in English. In modern Dutch it would read 'U bent vrij'.

5 May 1945 is the date the German forces surrendered in the Netherlands.

We have been told by the Association of Jewish Refugees that this is where the broadcast went out which inspired Anne Frank to rewrite her diary for publication.

The building’s listed so we have the erection date: 1929.

This section lists the subjects commemorated on the memorial on this page:
Netherlands Government in exile

The Netherlands were invaded by Nazi Germany on the 10th May 1940. Queen Wilh...

This section lists the subjects who helped to create/erect the memorial on this page:
Netherlands Government in exile

The MOBO Awards (Music of Black Origin) was established in 1996. Ms Dynamite ...