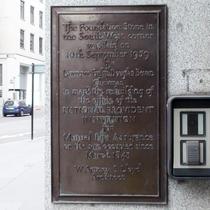 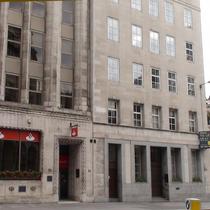 The foundation stone in the south-west corner was laid on 10th September 1959 by Lawrence Emlyn Douglas Bevan, Chairman, to mark the rebuilding of the office of the National Provident Institution for mutual life assurance on the site occupied since March 1843.
W. Antony S. Lloyd - Architect

The foundation stone to which this plaque refers reads "National Provident Institution for Mutual Life Assurance. This stone was laid on the 10th September 1959 by Lawrence Emlyn Douglas Bevan, Chairman". Near this stone below the first floor windows the building is inscribed, twice, "Est.1835".

The two NPI plaques are in the doorway on the right, at no 48; the Curtis plaque is to the left at no 51. NPI have made rather excessive use of plaques and inscriptions on their building, as if they think their history will fly away if they don't pin it down in the stone.

During our research we came across a strange co-incidence: The architect of the NPI building (named on the north plaque) had a close familial and professional relationship with a Mr William Curtis Green. Next door, 200 years earlier, lived a Mr William Curtis. Spooky.

This section lists the subjects commemorated on the memorial on this page:
National Provident - north

This section lists the subjects who helped to create/erect the memorial on this page:
National Provident - north

Chairman of National Provident Institution in 1959. Andrew Behan has research...

This section lists the other memorials at the same location as the memorial on this page:
National Provident - north

Jim's Pitch.  In memory of Jim McFarland's outstanding commitment to the Russ...

Tasty Toasties was officially opened by Frank Bruno (MBE) on the 8th March 2000.