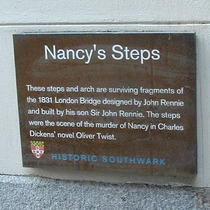 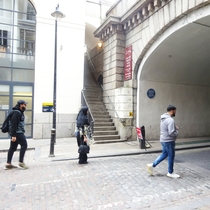 Nancy's Steps
These steps and arch are surviving fragments of the 1831 London Bridge designed by John Rennie and built by his son Sir John Rennie. The steps were the scene of the murder of Nancy in Charles Dickens' novel Oliver Twist.
Historic Southwark

The plaques both have the facts wrong; in the novel Nancy is murdered in her house. It is in the 1960 musical Oliver! that she is murdered at steps leading to London Bridge. However the steps are mentioned in the novel as explained at Lost Industry.

2016: We are grateful to Chris Harry who, via Facebook, has very helpfully provided further useful links for people who want to fully understand this Steps issue: a detailed map showing the bridge and its steps; a link to the relevant text, Ch XLVI (dead but Gutenberg works, 2022) and a link to the sequence in the film. That really is a very thorough analysis of the issue!

When we first visited this site (winter 2012) all one could see was the empty frame which had held plaque 1, to the left of the steps. So we are grateful to Monkeyboy69 for having got there in time.

2020: Lionel Wright helpfully wrote via Facebook with the latest update: "Recently, probably in 2020, a new round plaque appeared near the foot of the stairs in the photo. It's been installed on the wall just inside the bridge tunnel to the right. Sadly the sign repeats the incorrect wording of its predecessor. Like Chris Harry I thought the Heritage section of Southwark Council was responsible. I wrote to Southwark Heritage to draw their attention to the mistakes in the wording. They told me it wasn't erected by the council. As the City of London Corporation manages London Bridge, I've written to the City Bridge Trust to ask if they know who sponsored the plaque."

One day someone will get this right.

August 2020: Our colleague Alan Patient took our new photos, capturing the new plaque. He remarks that Google Street View for April 2020 doesn't show it which narrows down its erection date.

2022: Londonist have got to grips with "Steps Gate" as it might be called, but probably isn't. They point out that the steps are remnants from the 1831 bridge, whereas the novel 'Oliver Twist' is set before that bridge was built. Any steps in place at that time belonged to the 1760 bridge which was the old medieval one with the houses and shops removed and the roadway widened.

This section lists the subjects commemorated on the memorial on this page:
Nancy's Steps - plaque 1

This section lists the subjects who helped to create/erect the memorial on this page:
Nancy's Steps - plaque 1

This section lists the other memorials at the same location as the memorial on this page:
Nancy's Steps - plaque 1

Unveiled by Lucinda Dickens Hawksley.  Behind this plaque is an interesting d...

Pristinae Virtutis Memor was the motto of the Queen's Royal West Surrey Regim...