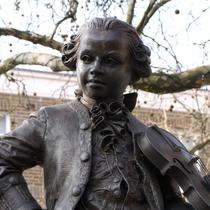 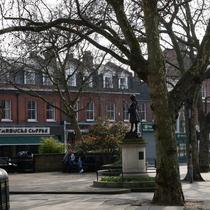 {Front of plinth:} Wolfgang Amadeus Mozart, born Salzburg 27th January 1759, died Vienna 5th December 1791.
{Plaque on rear of plinth:} This bronze statue of the young composer Wolfgang Amadeus Mozart was commissioned by Christopher Moorsom and Francis Sitwell from Philip Jackson FRBS in 1991 to commemorate the bicentenary of the composer's death. Mozart is depicted as he looked when he lived with his family at 180 Ebury Street and when he wrote his first symphony in 1764. Her Royal Highness the Princess Margaret, Countess of Snowden unveiled the statue on September 21st 1994. Many members of the public contributed to the cost of this work including Ronald and Jean Carr, foundations and charitable trusts, Summit Furniture, the Kleinwort Benson Group and the government estate.
Donald W. Insall & Associates - architects and planning consultants.

Some sources give the address as Mozart or Orange Square. As far as we can tell these are unofficial local names for the area.

This section lists the subjects commemorated on the memorial on this page:
Mozart statue

This section lists the subjects who helped to create/erect the memorial on this page:
Mozart statue

This statue was erected in commemoration of the 350th anniversary of the foun...