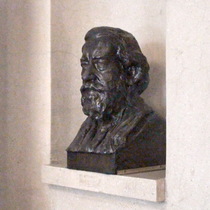 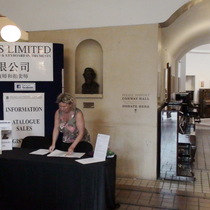 In the early 1900s Moncure Conway retired to Paris, where he met and became good friends with sculptor  Spicer Simson, still in the early stages of his career. There in 1904, the bust was made and 3 copies were cast in bronze, two for organisations in America and one for SPES but in 1926 this one was lost in the move from South Place to Red Lion Square.

2017, using 3D printing SPES  had a copy made of one of the American busts. The striations of the process can be seen in the surface of the sculpture.

The South Place Ethical Society moved here, into this purpose-built building in 1927, from their previous premises in South Place. In the library there they had displayed a bronze bust of Moncure Conway and in the new building they had a niche designed and built in their entrance hall specifically to display this bust. But it never took up its new home, it went AWOL instead. But oddly no one noticed, or thought to investigate until recently.

2016: A film, The Empty Niche, gives the story of the investigation into the lost bust.

2018: When we pitched up to take our photos the hall was being prepared for a piano auction and the bust was behind a large blue display board which the organisers kindly moved so we could take our photos. Hope the auction went well.

This section lists the subjects commemorated on the memorial on this page:
Moncure Conway bust - lost

This section lists the subjects who helped to create/erect the memorial on this page:
Moncure Conway bust - lost

Sculptor and medallist. On the page about his brother, Geoffrey, Wikipedia sa...

The weather has removed all the hair and costume details which are essential ...