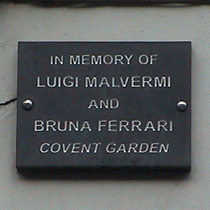 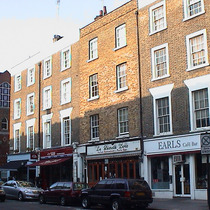 In memory of Luigi Malvermi and Bruna Ferrari
Covent Garden

In the absence of any other source our colleague Andrew Behan has turned to the Post Office telephone directories for the background to this plaque. He found, listed between 1954 and 1966, the following:

With the introduction of all figure numbering this entry changes to show the telephone number as 01-240 0255 in the 1967 edition of the L-R London directory.

The 1968 London directories then no longer show Malvermi L, however they do list the following in the E-K edition:

and continue to do so until 1984 when the Post Office became British telecommunications plc and I do not have access to their historic records.

So it would seem that Luigi Malvermi was running a café at 16 Endell Street from at least 1954 (he may have been there earlier but only had a telephone line installed and listed in the directory in 1954) and the business was transferred to Bruna Ferrari around 1967 or 1968. I have no idea when she actually ceased trading.

Since they share a plaque we would guess that, for at least a part of its life, the cafe was run jointly by Malvermi and Ferrari. Perhaps they were related, father and daughter, husband and wife?

This section lists the subjects commemorated on the memorial on this page:
Malvermi and Ferrari

The Parish Hall of St Olave Hart StreetThis Hall which stands in part on the ...