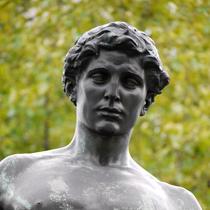 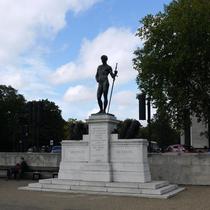 {Front of main plinth:}
Erected to commemorate the glorious heroes of the Machine Gun Corps who fell in the Great War.
Saul hath slain his thousands, but David his tens of thousands.
{Quote from the Bible 1 Samuel 18:7.}

{Rear of plinth:}
The Machine Gun Corps of which His Majesty King George V was Colonel-in-Chief, was formed by royal warrant dated the 14th day of October 1915. The corps served in France, Flanders, Russia, Italy, Egypt, Palestine, Mesopotamia, Salonica, India, Afghanistan and East Africa. The last unit of the Corps to be disbanded was the depot at Shorncliffe on the 15th day of July 1922. The total number who served in the Corps was some 11,500 officers, and 159,000 other ranks of whom 1,120 officers and 12,671 other ranks were killed and 2,881 officers and 45,377 other ranks were wounded, missing or prisoners of war.

The statue is of the boy David holding Goliath's sword (the clue is in the size of the sword). The model for this statue used to be on public display on Chelsea Embankment but was stolen.

See Ornamental Passions for more background to this statue.

The memorial was originally erected in 1925 next to Grosvenor Place (the road entering this traffic hell from the south), but was dismantled in 1945 due to roadworks. It was rededicated in its present location in 1963. The statue is flanked by two real Vickers machine guns, encased in bronze and laurel-wreathed.

This section lists the subjects commemorated on the memorial on this page:
Machine Gun Corps memorial

This section lists the subjects who helped to create/erect the memorial on this page:
Machine Gun Corps memorial

The expression "our glorious dead" suggests that this memorial was raised to ...