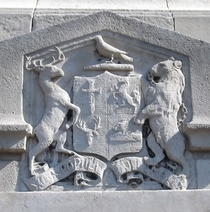 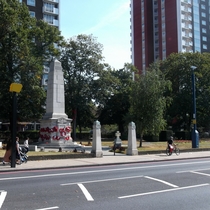 {On the obelisk plinth, beneath the coat of arms of the former Metropolitan Borough of Lewisham with the motto 'salus populi suprema lex' (the welfare of the people is the highest law):}
In memory of all Lewisham people who lost their lives 1914 - 1918 and 1939 - 1945.

{On a free-standing urn at the base of the obelisk:}
Womens (sic) Section E&C Lewisham Branch British Legion
We will remember them

The Lewisham War Memorials website says that the inscription on the main memorial reads:
'To the memory of Lewisham heroes 1914 - 1918 and 1939 - 1945', and also that a plaque with the addition of World War II was unveiled on the 11th November 1949. Although this addition is probably what is now on the obelisk, the original one certainly couldn't have referred to '1939 - 1945'

E&C Lewisham on the urn stands for East and Central Lewisham.

The same inscription appears on both of the piers, although the left hand one is badly worn. Perhaps a more recent copy was made on the right hand one, or that one has been restored.

This section lists the subjects commemorated on the memorial on this page:
Lewisham war memorial

This section lists the subjects who helped to create/erect the memorial on this page:
Lewisham war memorial

This section lists the other memorials at the same location as the memorial on this page:
Lewisham war memorial