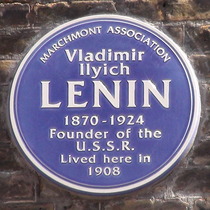 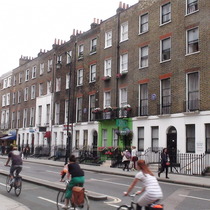 Lenin stayed at this address (formerly numbered 21) in 1908 whilst reading at the British Museum and writing 'Materialism and Empirio-criticism'.

This was a controversial plaque. When he heard about it, an acquaintance of ours who lives in the area wrote: "Appalling! He was responsible for a movement that caused far more deaths than Hitler, from which the Russians are only just recovering. I intend to email {the Chair} dissociating myself from the Marchmont Association." Strong views, but perhaps he's confused Lenin with Stalin.

Jerome on the right at number 32. Lenin on the left (appropriately) at 36. Debbie Radcliffe and Richard Ekins are two of the people involved in researching and erecting this plaque. Richard writes "... it took really serious research to pin point the location. Another example of there being two addresses in the same street which confused everyone." For anyone interested in further reading he suggests the 2017 book by John Llewelllyn, Three Men Went to Row."

This section lists the subjects commemorated on the memorial on this page:
Lenin - Tavistock Place

This section lists the subjects who helped to create/erect the memorial on this page:
Lenin - Tavistock Place

This section lists the other memorials at the same location as the memorial on this page:
Lenin - Tavistock Place