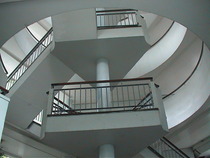 This memorial was given to the people of Finsbury by the Russian Embassy in London. We understand that its display in the garden was a temporary arrangement and that the plan was to move it into the block of flats once that was complete. The memorial was visited respectfully by communists but was repeatedly vandalised by anti-communists. So in 1951, before the flats were completed, the council took the bust into protective storage and kept it, presumably expecting the vandalism would recur, were the bust displayed inside the flats. Indeed when the council put it on display in the 1970s it was vandalised again. The Islington Museum took it on in 1996 and it is now on permanent display, apparently without incident.

There are a number of stories about this bust that we find difficult to believe: that Lubetkin made the bust (he was not a sculptor, though he may have designed the frame in which it was displayed); that Lubetkin had mutiple copies made and replaced them as necessary (we don''t think it's the sort of object that could be copied cheaply at that time, but see below); that, in pique when the council refused to have the bust inside the building, he buried it under the staircase (the surrounding frame possibly, as rubble, but not the bust, since that survived).

Have a look at our picture of Ivan Maisky, the man who unveiled the plaque - he's photographed 'in his office' beside a half-made bust of Lenin that we think could be this bust. Our picture of the bust on site comes from a BBC article. More pictures on site here, and in the Islington Museum. On the hunt for the name of the sculptor we went to see the bust at the Museum. It's a fine bust with a very modernist feel, though we are unsure of the material; it could indeed be moulded (in which case multiple copies would be possible). We searched for the sculptor's name and, on the underneath of the back rim of the bust, we found "19-C Mo Daz. (A Kow) - 37" or "19-C Mo zar. (A Kow) - 37". The "37" might be "34" but the museum dates the bust as 1937 so we think that's the date. And "A. Kow" turns out to be an artist, born in Russia in 1901, with a very modernist style. He is mainly known for automobile advertisements but we read he also did some sculpting - he's our man!

This section lists the subjects commemorated on the memorial on this page:
Lenin - Holford Gardens - bust

This section lists the subjects who helped to create/erect the memorial on this page:
Lenin - Holford Gardens - bust

This section lists the other memorials at the same location as the memorial on this page:
Lenin - Holford Gardens - bust

This used to be "mystery bust" in Puzzle Corner but our colleague, Alan Pat...

This bust, erected 200 years after O'Higgins left Richmond, was designed by E...