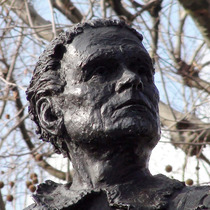 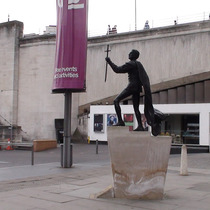 {On a brass plaque at the front of the plinth:}
Lawrence Olivier as Hamlet by Conner

{On a large brass plaque near the ground at the front:}
Laurence Olivier O.M., Actor, 1907 - 1989
Baron Olivier of Brighton, Founding Director of the National Theatre, 1963 - 1973.
More than two hundred, mainly theatre and film people and institutions, contributed to the Laurence Olivier Centenary Statue Appeal made by his son Tarquin, who said -
"Larry was true. He was exciting, gloriously funny, and is still part of what make life worth living, as is his creation the National Theatre."
The principal contributors were {see the Creators list.}

{The main plaque which can be seen near the ground in our photo was, by 2013, moved and attached flat directly to the front of the plinth.}

Unveiled by Sir Richard Attenborough, Larry‘s son, Tarquin and widow, Joan Plowright. The list of "principal contributors" has some surprising entries and some we cannot identify at all. We've tried to establish a link with Olivier for each of them but have not always succeeded. Any help gratefully received.

Olivier founded the National Theatre so this is a very appropriate site for the statue.

This section lists the subjects commemorated on the memorial on this page:
Laurence Olivier statue

This section lists the subjects who helped to create/erect the memorial on this page:
Laurence Olivier statue

In 1996 the BFI erected 126 plaques across Britain to commemorate the centena...

The town where Laurence Olivier was born.