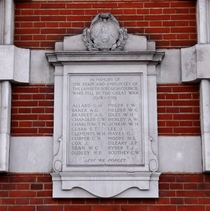 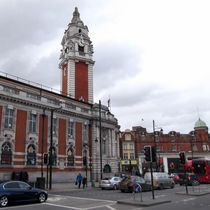 {Beneath a composite coat of arms:}
In memory of the staff and employees of the Lambeth Borough Council who fell in the great war 1914 - 1919.
{Followed by twenty-two names. See commemorated subjects:}
"Lest we forget"

"Lest we forget" is a quote from Kipling, often used on war memorials for WW1 and after.

The coat of arms used on this memorial comprises:
1. The initials VR and 1900. The initials stand for Victoria Regina who was queen in 1900, the year when Lambeth became a metropolitan borough.
2. The coat of arms of the diocese of Canterbury, reflecting the Archbishop's residence at Lambeth Palace.
3. The chequered coat of arms of the Warrenes, who were Earls of Surrey. (Lambeth was part of the county of Surrey until 1889).
4. A shield with a lamb and the word Hythe. This is an example of 'canting', where a name appears as a visual pun or rebus. The lamb and hythe gives Lamhythe, meaning a harbour where lambs are shipped to or from, and is the supposed origin of the name of Lambeth.

These explanations of place name origins, although recalling the rustic past of an area, can give rise to some suspicion. In this case, was Lambeth really the only place on the Thames where lambs could be processed and vice versa, were no other livestock or goods handled in this area?

In our photo the plaque can be seen between the lower third and fourth windows from the left.

This section lists the subjects commemorated on the memorial on this page:
Lambeth war memorial - WW1

Employees of Lambeth Borough Council who fell in WW1

Council staff who fought and died in WW1.

This section lists the subjects who helped to create/erect the memorial on this page:
Lambeth war memorial - WW1

We normally rotate our memorial pictures as necessary to make sure the statue...

William Wilberforce and 'the Clapham Sect' worshipped in this church.  Their ...

The plaque is inside the central arch.