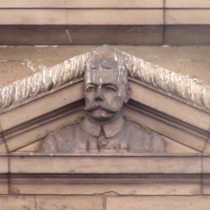 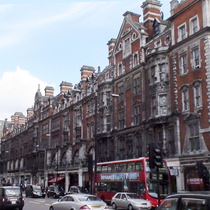 Stalin?  Can't be - for so many reasons, one being that he didn't look like this at this time; he was much younger.

Lea Cornthwaite suggested this might be the Duke of York (later King George V).  Stephen Brasher suggested Lord Kitchener.   We compared some pictures and are plumping for Kitchener - it was the position of the parting that convinced us.

This huge building, Grade 2 listed and in need of a clean, is actually 18 buildings behind a unifying facade designed by W. D. Caroe, in red brick with stone dressings in an eclectic Queen Anne/Flemish style. 1902 - 5. Built as a mansion block but unusually there were seven developers who designed their own segments behind the facade.

A 2010 planning application contains a few drawings and early photographs but there is no mention of these busts, numbered here left to right.

When we published these 6 busts we were pretty confident with our identification of heads 1 and 2 but were struggling to identify the others.  Readers quickly sent in some helpful suggestions, readers more familiar with the faces of celebrities from that period than we are.  So we have corrected our identifications, but if you think we still have it wrong please let us know.

The second floor corner at Wilton Place carries a rather splendid royal crest with the top-most lion looking more like a lap-dog.

This section lists the subjects commemorated on the memorial on this page:
Knightsbridge - 4 - Kitchener

This section lists the other memorials at the same location as the memorial on this page:
Knightsbridge - 4 - Kitchener

We original thought this was Gladstone (who had died only a few years before)...

Lea Cornthwaite suggested this might be the Duke of Cambridge. Stephen Brashe...

The poem is from 'Song Offerings' by Tagore. Written in Bengali, he created t...