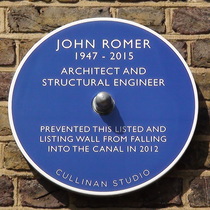 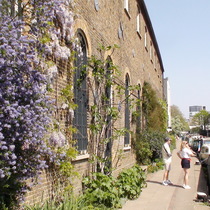 John Romer, 1947 - 2015, architect and structural engineer, prevented this listed and listing wall from falling into the canal in 2012.
Cullinan Studio

In our photo you can see, at first floor level, a row of wall tie plates.  This blue plaque has every appearance of being one of those, coloured blue. A neat visual joke, as good as the verbal pun in the inscription.

Cullinan Studio occupy the building behind this wall, with address 5 Baldwin Terrace. They are the firm of architects for which Romer worked for 28 years.

This section lists the subjects commemorated on the memorial on this page:
John Romer

This section lists the subjects who helped to create/erect the memorial on this page:
John Romer

{Beneath a representation of the Victoria Cross medal:}Lieutenant Geoffrey Ca...

SH Within these precincts stood the Palace of Savoy, the erection of which wa...

Not a good choice of stone for a plaque.