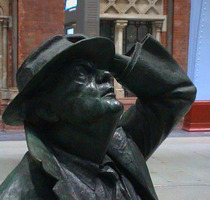 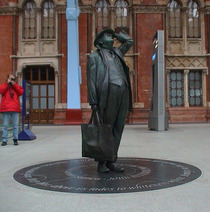 {and in an outer circle:}
Martin Jennings, sculptor, 2007.
And in the shadowless unclouded glare
Deep blue above us fades to whiteness where
A misty sealine meets the wash of air.

Unveiled in November 2007, this statue was an instant success with the public. At eight and a half feet he is bigger than life-size, but standing on the ground with no plinth, peering up at the splendid roof, he seems one of us. Certainly the other statue unveiled at the same time, "The Meeting Place", at 9m high, has not had the same appeal.

On the ground leading to the statue there are five Cumbrian slate discs inscribed with Betjeman quotations.

March 2012: plans for a copy of this statue in Wantage, where Betjeman lived for 20 years.

This section lists the subjects commemorated on the memorial on this page:
John Betjeman statue

This section lists the subjects who helped to create/erect the memorial on this page:
John Betjeman statue