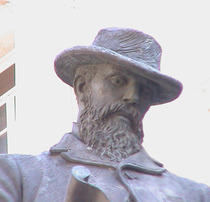 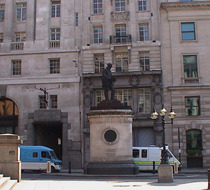 {Below the circle:}
J.H. Greathead, chief engineer, City and South London Railway, inventor of the travelling shield that made possible the cutting of the tunnels of London's deep level tube system.

{On south face of plinth, in circle, around a corporate image that includes water and a bridge:}
City and South London Railway

The relief depicts eight men shovelling and manually transporting earth. They are inside a multi-jointed ring which is presumably the travelling shield. It is clear that the invention did not remove all the toil from the task.

Note that part of the Greathead shield used in digging the tunnels at Bank Station was left in situ.

Why is this statue, relatively modern, on a high pedestal, situated in the middle of the road like this? Answer supplied by Tony Tugnutt, conservation officer with the Corporation of London at the time: "London Underground required a vent shaft to meet new safety measures (post- King's Cross fire ). The required size was of a double-decker bus and it had to be placed at the Bank Junction - one of the most famous spaces in the City. The layout was symmetrical and they wanted to place it in front of the Royal Exchange. It was important to maintain a balance. We came up with the idea of siting it in the middle of Cornhill - off stage so to speak -similar to the magnificent one in Fleet Street near Chancery Lane. The next question was the subject for what would have to be a fairly monumental object. Being the City, some bright spark came up with the idea of a sculptural group depicting a bull, a bear and a stag - the end result looked like something out of Walt Disney's studio! A colleague who was a bit of a railway buff and I alighted on the idea of Henry Greathead. Greathead had pioneered the travelling shield technology used widely on our underground system and for the Channel Tunnel and seemed to me an ideal subject. We had some difficulty getting a suitable image for him as he was South African (hence the hat) and finally got an image from an old photograph or newspaper. The sculptor, James Butler, was short-listed with the help of the Royal Society of British Sculptors and my mate Philomena Davidson-Davis who was then President. Butler told me that he had worked in the studio of the sculptor who had done the figures on the Bank of England opposite (see Pevsner for details) - so there is a nice connection! Had some trouble with the maquette as his legs were rather short and I remember telling the sculptor that we did not want any working class heroes! So the legs were stretched and I was very pleased with the end result. The granite base details with the overthrows at the corners was influenced by the one in Fleet St already mentioned. Know it cost LU an arm and a leg (no pun intended) but money well spent I think! We had a nice opening ceremony with the Lord Mayor riding in a cherry picker and Greathead's grandson attended.

This section lists the subjects commemorated on the memorial on this page:
James Greathead statue

This section lists the subjects who helped to create/erect the memorial on this page:
James Greathead statue

{Around plinth of statue:}Johnny Haynes 2005, 'The Maestro' captain of Englan...