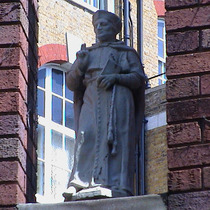 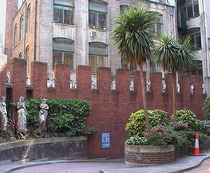 Sampson Strong's portrait of Wolsey has these clothes and, crucially, the raised fingers.

2014: Spitalfields Life reports on a reunion held in a function room at the Imperial Hotel, with lots of photos. And in some of these photos you can see versions of these statues, in glass cases. We made a fact-finding visit and located the room as the Elizabethan Restaurant". The statues are in much better condition than those out on the car-park ramp but there is no additional information: no labels and no sculptor's name on the statues, as far as we could see.

This section lists the subjects commemorated on the memorial on this page:
Imperial Hotel - statue 08 - Wolsey

This section lists the subjects who helped to create/erect the memorial on this page:
Imperial Hotel - statue 08 - Wolsey

This section lists the other memorials at the same location as the memorial on this page:
Imperial Hotel - statue 08 - Wolsey