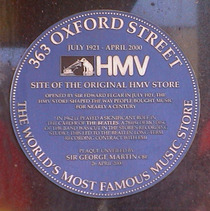 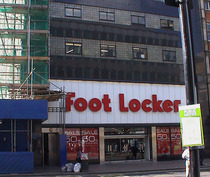 363 Oxford Street - the world's most famous music store.
July 1921 - April 2000
HMV
Site of the original HMV store, opened by Sir Edward Elgar in July 1921, the HMV store shaped the way people bought music for nearly a century.
In 1962 it played a significant role in the career of The Beatles. A 78 RPM demo disc of the band was cut in the store's recording studio - this led to The Beatles' long-term recording contract with EMI.
Plaque unveiled by Sir George Martin CBE, 26 April 2000.

Chosen as the featured memorial in December 2004, for lots of reasons. Firstly, it commemorates, amongst others, the Beatles, which shows memorials don't have to be about stuffy history. Also, it illustrates the point that not all blue plaques are "blue plaques" (as installed by English Heritage). But really to commemorate Bob Baker who died in October 2004. A good friend for 30 years and fellow Londonophile, he helped us find memorials - we would have missed this one completely if Bob hadn't spotted it. But his real love was cinema - he had seen, and remembered, an awful lot of movies and was generous in his reviews and with his knowledge. Well-respected and widely published, including the Time Out Film Guide, his reviews and criticisms are his memorial.

Londonist draws our attention to some wonderful pictures of this store in the 60s at Voices of East Anglia.

This section lists the subjects commemorated on the memorial on this page:
HMV store

This section lists the subjects who helped to create/erect the memorial on this page:
HMV store

This rather dull plaque is in the garden close to the Hamilton fountain.