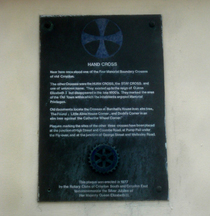 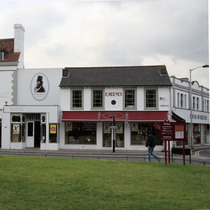 {Beneath a Maltese cross:}
Hand Cross
Near here once stood one of the four manorial boundary crosses of old Croydon.
The other crosses were the Hurn Cross, the Stay Cross and one of unknown name. They existed up to the reign of Queen Elizabeth I but disappeared in the late 1600's. They marked the area of the old town within which the inhabitants enjoyed manorial privileges.
Old documents locate the crosses at 'Burchall's House in an elm tree, The Pound; Little Alms House Corner, and Dodd's Corner in an elm tree against the Catherine Wheel Corner.'
Plaques marking the site of the other three crosses have been placed at the junction of High Street and Coombe Road, at Pump Pail under the fly-over and at the junction of George Street and Wellesley Road.

The Croydon Guardian tells about this building being home to the 144-year old family furniture business House of Reeves. Both these plaques were on the building before it was burnt down in the riots of the Summer 2011.

The Surrey Iron Railway plaque was found in the rubble and it was re-erected in October 2011.  The Hand Cross plaque was not found and is presumed lost.

This section lists the subjects commemorated on the memorial on this page:
Hand Cross - Croydon

This section lists the subjects who helped to create/erect the memorial on this page:
Hand Cross - Croydon

This section lists the other memorials at the same location as the memorial on this page:
Hand Cross - Croydon

This plaque was installed in 2017, on the 30th anniversary of the Great Storm...

We are indebted to Rosemary Jeffreys for the translation from the Latin. The ...

This tablet commemorates the naming of this building in 1961 after the first ...

The Mayor's and City of London Courts

This tablet records the amalgamation of the Mayor's Court and the City of Lon...