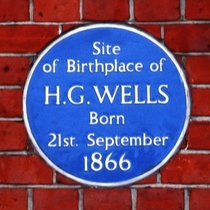 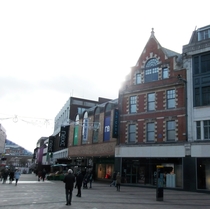 The plaque is located between the second and third windows on the first floor of this 1890s building.

The Bromley Civic Society have essential information about this plaque - it's on Victoria Chambers and that's the wrong building. Wells's birthplace was no. 47, one of the houses that were to the right (north) of Victoria Chambers, now all demolished and replaced with the Art Deco building occupied by Primark, who apparently didn't want the plaque on their building.

In more detail: In 1832 a footway was developed into a proper road (the 'New Cut', now this section of the High Street) with houses of the normal style for the period. (Note: the road has since been renumbered.) No. 47 was a shoe / leather work shop belonging to Thomas Churcher. Then Joseph Wells (father of H. G.) bought it and it became a china, glass and pottery shop with the Wells family living above (and below).

Fred Medhurst started a drapery shop in 1879, first occupying numbers 49 and 50 in the High Street. He went on to acquire several adjacent properties along the New Cut, including, in the 1880s, Joseph Well’s shop. See BCS for a photo of nos 44, 45, 46, etc. at this period, all branded Medhurst, as far as one can see.  In 1930 Medhurst demolished the old buildings (between 5 and 9 of them, by the look of it, with no 47 towards the northern end) and built the current, rather fine, Art Deco department store which traded as a family-owned business until sold to Allders in 1969.  Now (2022) occupied by Primark. This 1895 map and this 1912 map are useful.

When the family lived at number 47 Wells described the kitchen as being below the ground floor shop, lit by a 'window' in the pavement in front of the shop window.

This section lists the subjects commemorated on the memorial on this page:
H. G. Wells - High Street Bromley - birth